skip to main | skip to sidebar

COME TO A VIRTUAL CONVENTION

The Virtual Convention is on at RUBBERSTAMPCHAT!!

What is a Virtual Convention? It’s an online rubberstamp convention that is taking place at the Rubberstampchat (RSC) forum. The forum will have a special “convention hall” section set up just for this event in the forum.

The RSC vendors set up their 'booth' as a thread in the convention hall section. Then you have until the 28th to see what show specials are being offered by that company. The Flourishes "booth" is located HERE - look for our special convention discount code! So, instead of getting up early to drive to the show and walk around all day in a big hall full of people and only have less than healthy food available, you get to wear your jammies, eat REAL food when you want, not wait in line for anything (including the potty) and shop at your leisure 24/7.
Come join the fun!!
Posted by NancyK at 1:23 PM No comments:

We are expanding our line of ribbons to include some richer, darker colors. The first is reversible satin ribbon with a "stitch" edge of the reverse color. It is in a deep burgundy shade with gold/tan on the opposite side 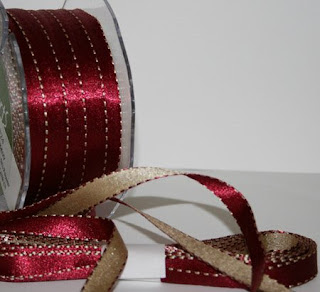 The next is a 1 inch wide satin ribbon with a grosgrain edge in a champagne shade. It would look stunning on a number of paper colors, blush blossom comes to mind used with Wedding Party stamp set. 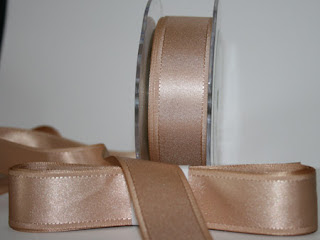 Basicgreys perhaps pad is another that coordinates well with the champagne.
Take a look at what happens when you combine the two satin ribbons in a layered look. 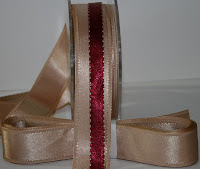 You get a spark of color on a sedate background.
We have also added a burgundy satin ribbon to go with the more masculine range of colors in the Boxer pad from BG. 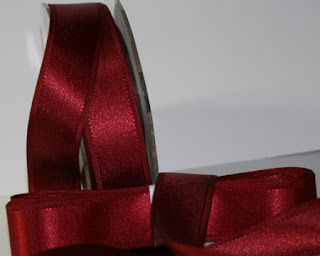 There are shades of dark red in many of Basicgreys papers that will look fantastic with burgundy.
We have added a more narrow sheer ribbon in apple green. It is a trial run for the store, we have not had any of the sheers in this width before. For now it is in limited quantities. 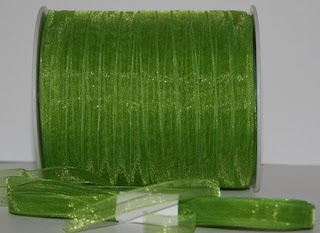 The 1/4 inch width works well on its own or layered with other ribbons in a monochromatic color scheme or with coordinating ribbons.

The last ribbon I want to show you is another trial run for us in a new shade of velvet. It is also in the apple green family but with a deeper, richer shade.
I could not pass up the chance to try other colors, they have such a luxurious feel to them 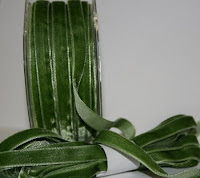 Try some out today and look for more colors soon.

Posted by Sewflake at 1:45 PM No comments:

Check out these wonderful products!

Flourishes has added two more "tools of the trade" to the store.


First is this great waterbrush from Yasutomo. Once you've used this brush you will never go back to a normal paintbrush for watercoloring. It's a combination nylon brush and water container handle. The water container handle holds 7ml of water. It can be used for watercoloring, rubber stamping, silk painting, bleaching, and face painting. It is also very handy for sealing envelopes or stamps. Just fill the handle and you are ready to go! 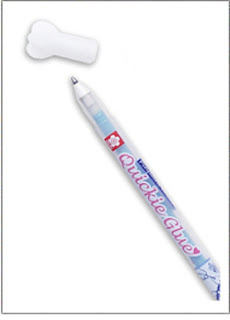 Next is this wonderful Quickie Glue Pen. Putting glue on paper is as easy as signing your name. Experience the writing ease of a pen with precision glue placement. Quickie Glue™lays down a smooth line and keeps glue from spreading or globing-up. Glue is placed precisely where it is needed to be to hold the teeniest, tiniest enhancement. Decorate scrapbook & journal pages, cards, stationery, and collages! Excellent for hand made quill projects. Can’t decide where to place an item? Temporarily place and move items around. To create a permanent bond, allow a few minutes for drying time before securing the items together.
What you can do with Quickie Glue - • Make straight, curvy or dotted lines • Draw flower, paisley or scallop patterns• Polka-dots, hearts, and zigzags. Then you can sprinkle with glitter, confetti or apply gold, silver or copper foils!
Quickie Glue™ features:• Easy to find cap – different looking from pen caps• Spring activated nib allows longer cap-off time• Not necessary to shake or squeeze• Blue glue color indicates bond is permanent and white glue color indicates a temporary or moveable bond.

Both of these products can be found on the Flourishes store under "Card Making Essentials".
Posted by NancyK at 3:05 PM 1 comment:

We've just received our shipment of the new Basic Grey paper lines and we can't decide which ones we like best!! We've added three new collections to the store - these are the 6 x 6 pads that are perfect for cardmakers. The new collections are Boxer, Sugared and Sultry. You can find these and the other Basic Grey lines at Flourishes under the paper category. 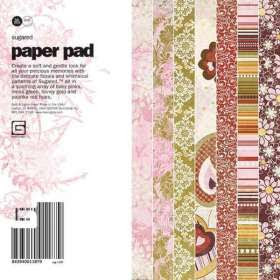 Posted by NancyK at 9:14 AM No comments:

There is so much happening this week at Flourishes!! First, let me welcome Sharon Harnist as Guest Designer for Flourishes for April and May. Sharon's work is just drop dead gorgeous and we are so happy to have her talents bring such life to the Flourishes Stamp line! Here is a little bit about Sharon.. 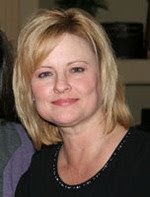 After being an avid scrapbooker for about 8 years, Sharon was first introduced to rubber stamping in February 2004 where she found her papercrafting niche. Shortly after, she became a demonstrator and instructor of rubber stamping, cardmaking & scrapbooking in May of 2004. Coloring stamped images is her favorite form of rubberstamping. She's been published in several magazines, most notably in Take 10, Rubber Stamper and PaperCrafts.

Sharon has been married for 14 years. She and her husband reside in their native Texas with their two young daughters. Sharon served on the Splitcoaststampers.com Design Team from January to November 2006. Currently she designs for Spellbinders Paper Arts (who makes our beloved Nestabilities!) and Lockhart Stamp Company.

You can follow her paper crafting endeavors at http://www.paperfections.typepad.com/, where she provides informative tutorials on all types of paper crafts. Welcome, Sharon! 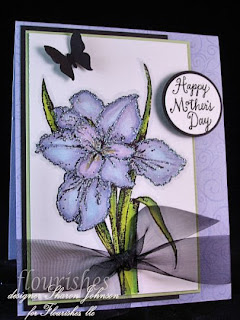 Next - it's release day here at Flourishes and we have three great ones! First is this drop dead gorgeous Siberian Iris set, done exclusively for us by Marcy Hawley. Marcy designed our web site as well as some other sets and we were simply blown away when we saw this set! It contains 11 stamps, featuring the Siberian Iris image. The set also contains a pretty topiary, a few flourishy elements and several sentiments. The Iris card is created by designer Sharon Johnson. 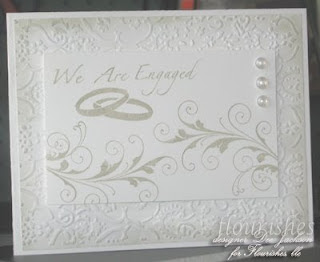 The other two sets are Wedding Party and Wedding Essentials. These sets work well together or separately. Wedding Party contains more artwork from Sophie, who recently did the artwork for our Menswear set. Wedding Essentials will work well for invitation, showers, cards and scrapbook pages. The "We Are Engaged" card is designed by Dee Jackson. The bridesmaid card is by designer Lisa Somerville.
You can see the complete sets at the Flourishes Store. 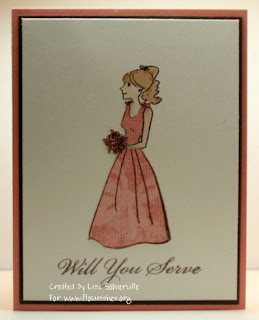 Finally, we are halfway through this weeks contest over at our SCS Forum. Just upload a card made with a Flourishes stamp and post a link on the forum thread here and you will be entered into the contest for a chance to win the Flourishes stamp set of your choice! We are also celebrating the one year anniversary of the SCS Weekly Inkling. Flourishes is one of the sponsors of this celebration and if you are a subscriber you may be a winner as well!
Posted by NancyK at 7:42 AM 4 comments:

Instead of a month long contest, Flourishes is having a week long contest (ok - technically 5 days!) starting today, Monday April 7th. We're celebrating a new release as well as the one year anniversary of the SCS Weekly Inking!
Here are the contest details:
-Upload a card using ANY Flourishes stamp during the time period of April 7 through April 11 and post a link on the Flourishes SCS forum thread here.
-Friday evening we will announce two winners who will receive the Flourishes Stamp Set of THEIR choice!!
If you are not a subscriber to the SCS Weekly Inkling - then do so now! Wednesday will be the one year anniversary and SCS will be giving away lots of prizes donated by many companies - Flourishes being one of them!

AND- be on the lookout for Flourishes new releases this week!!
Posted by NancyK at 8:11 AM No comments: 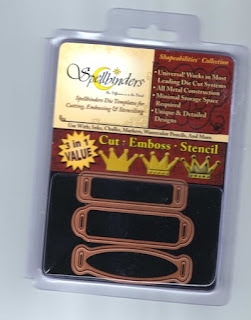 We just received a shipment of the new Shapeabilities dies from Spellbinders!! These new shapes will work so well with cardmakers and scrapbookers. I love the ribbon tags that come with a slot to thread ribbon, or even a thin strip of paper!

We have a very limited supply on hand - with more on order - so visit the store and place your order today!! 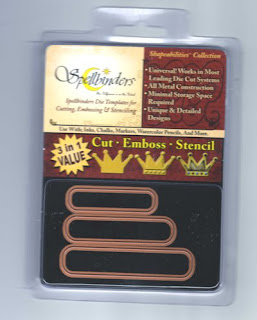 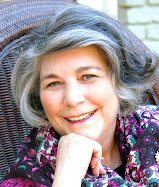 Have You 'Flipped' Yet?

Spend $100 (before shipping) on an individual purchase in the Flourishes store and you will become a card carrying member of FLIP a.k.a. the Flourishes Loyalty Incentive Program! Benefits include a fabulous embroidered Flourishes Tote, 15% off in a once a month member's only sale, first dibs on a special limited edition stamp set with member's only pricing, not to mention - members' creations will be highlighed from time to time right here on the Flourishes Newsletter. Become a FLIP Member today! 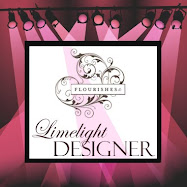